The 2022 FIFA World Cup will be the 22nd FIFA World Cup. Senegal is going head to head with the Netherlands starting on 21 Nov 2022 at 13:00 UTC at Al-Thumama Stadium stadium, Al-Thumama city, Qatar. The match is a part of the World Cup, Group A. 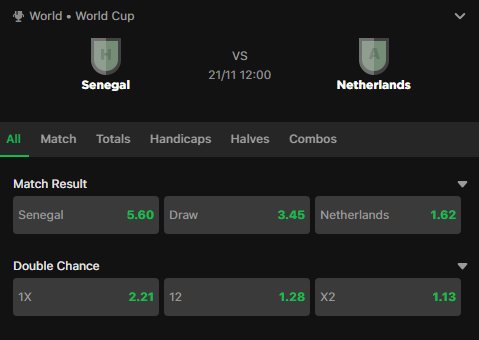 1. 3 points for a win in the group stage, 1 point for a draw, and 0 points for a loss. The top two teams in each group will advance to the quarter-finals. When two or more teams have the same points, the following rules will be followed for ranking (in descending order of priority).

2. Teams with the same points will compare their scores with each other, and the team with the most points will be ranked first.

3. Teams with the same score will have the most goal difference.

4. Teams with the same points scored the most goals.

5. Only games between teams with the same score will be counted, and the comparison will be repeated according to rules 1-3.

This sets the type of bets you would like to be automatically copied for you, with respect to the amount staked by the user that posted the bet slip.